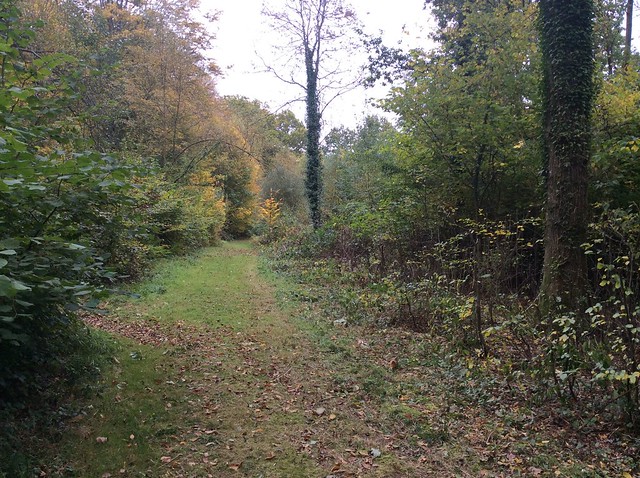 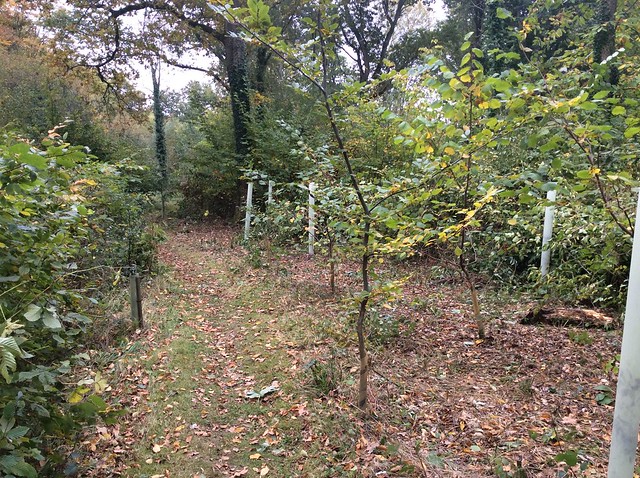 During the introduction I likened woodland conservation work to a 4D jigsaw in which the timescale is measured in decades. The wood is always moving inexorably upwards, thickening from young shoots to mature trunks at a surprising rate. The large area of hornbeam that we cut back last year is already two foot higher this year. You have to be on your guard, because before you know it, an unassuming patch of regenerating silver birch or hornbeam can rise to a dense thicket that stops the light getting to important clearings. Of course, it is much easier to control these areas when the trees are only finger-thick rather than leg-thick. Taking this sort of early action was another of the conservation tasks for the first day, cutting back the regenerating trees that would have ultimately shrouded the important marginal spaces around the buildings in darkness. 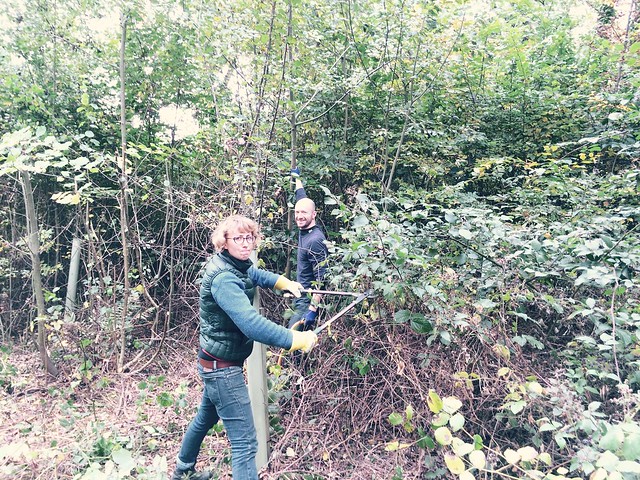 Amanda and Ben cutting back the branble and hornbeam

This year’s conservation weekend was led by a crew of five: Mary Stevens, Amanda Dennis, Henry Owen, Alan Heeks and me. Mary masterminded the whole operation, working out how to keep 38 people happy, active and fed in the woods for two days. Amanda and Henry worked tirelessly leading conservation work in the woods, keeping fires and candles burning, and generally ushering people to where they needed to be. Alan coordinated the conservation tasks, which left me to float around in the middle. 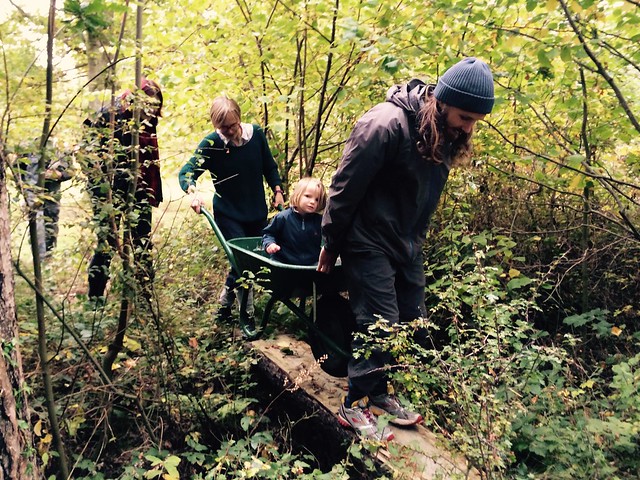 Expedition into the woods

As usual we always try to balance the conservation work with other ways to enjoy the woods. This year for the first time Nat Prosser ran a circus skills taster session for all ages. Amongst the trunks of the towering beech and scotts pine trees in the Heart Wood, Nat taught participants of all ages how to juggle and hula hoop. We also ran an afternoon session of forest games for parents and their kids such as ‘owl and mouse’ and that relaxing favourite, capture the flag. We led two walks around the wood, which were an opportunity to learn the forest’s ecosystem.

And of course, alongside all this organised fun, people wandered off whenever they wanted to just enjoy the woods on their own. 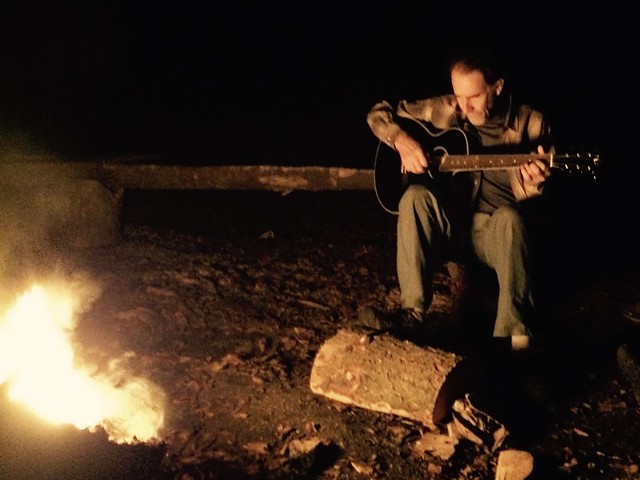 On Saturday evening we enjoyed a barbecued meal around the outdoor cooking area. Later that night, Nat and I led a swing dancing class in the Oak House. Later still, we gathered around the camp fire and sang songs, accompanied this time by accordion, guitar and violin (this was probably the best yet campfire music session I have been too). The experience was made all the more comfortable for a new series of fireside benches that had been carved by chainsaw out of enormous scotts pine logs that afternoon. Closer to midnight the last few standing enjoyed a late-night dip in the outdoor hot tub. 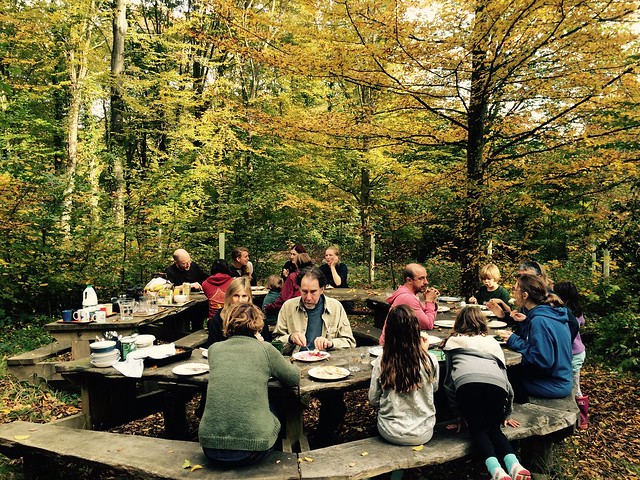 Outdoor meal at the oak table

After a much-needed stretching session on Sunday morning, led by Nat, we returned to the tools. That morning’s task was in an area much deeper in the wood where already-mature silver birch trees were restricting the growth of more desirable oak and douglas fir. This involved some serious sawing and felling and drinking cups of tea sitting on the mossy ground near our work site. After our last meal together, enjoyed around the large outdoor oak table, newly bathed in light following our hornbeam trimming on the first day, people relaxed in the woods and then slowly drifted off. 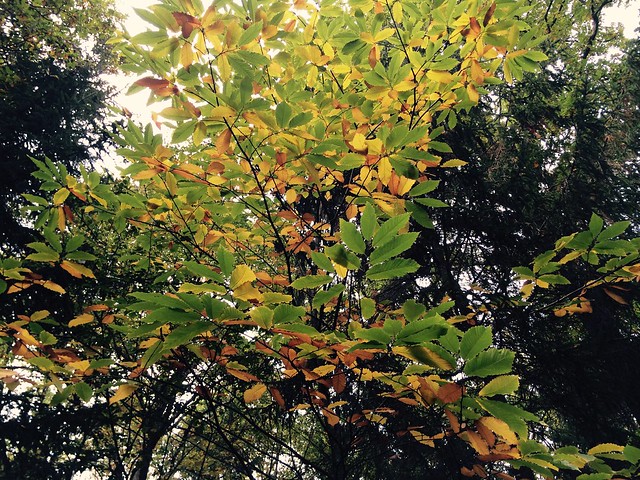 In the end, only Mary, S and I were left. We became aware of the return of the noises of the woods returning. It may have been that we were too busy to notice; or it may have been that usual inhabitants of the woods had been quietly watching us from their perches and hiding places all along, waiting for us to leave, and were now gradually returning… 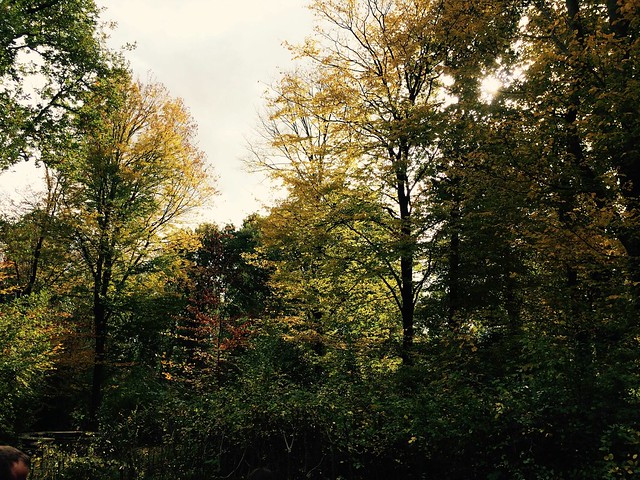