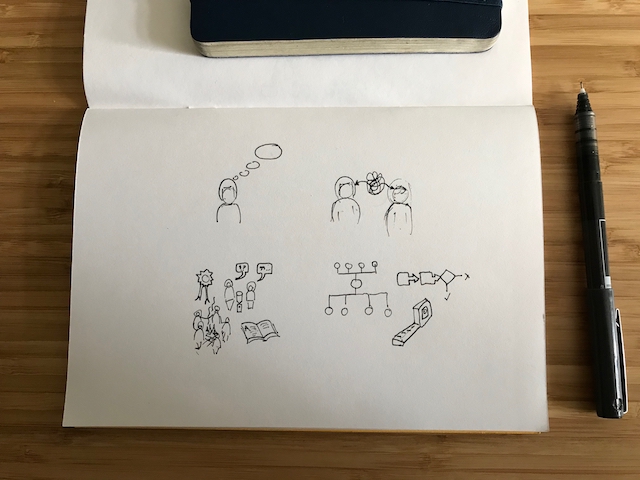 I am starting to shift my attention away from creative tools for engineers. Tools are still important. But I’ve realised that unless you need a creative culture for individual creativity to thrive.

Recently, I rediscovered in Laloux’s ‘Reinventing Organisations‘ the Wilbur four-quadrant model. The model descrives how culture, systems and worldviews interact. We can use this model to understand a phenomena in an organisations from four different perspectives:

I’ve assembled some quick thoughts on how the four quadrant model might apply to understanding creativity in an organisation. I have written the statements for a fictional ideal case. This difference between this ideal case and reality can give us some suggestions for what we might need to do to build a more creative organisation.

Defining the culture that we want

A tool that I find helpful for describing organisational culture is the Cultural Web (Johnson and Scholes, 1992). I’ll write more about that in a separate post. But let us say for the moment the organisational creative culture that we would like to achieve is the one described by my list. How can we go about achieving it?

Laloux goes on to explain how the Wilbur Four Quadrant model reveals three avenues we can follow:

Put in place supporting structures, practices and processes  Ensure people with moral authority in the company role-model the behaviour associated with the culture Invite people to explore how their personal belief system supports or undermines the new culture

Using Laloux’s example as a template, I will attempt my own illustration of how this could apply to creating culture of sharing creative work.

We could start by putting in place a series of recurring practices that encourage sharing of work. For example there could be a weekly pin-up of working sketches where people tour each other’s workstations to see what they have been working on. Another idea could be to hold regular idea scrapheap sessions, where people bring and swap discarded ideas from one project that others may be able to use in other contexts. By running these sessions regularly the culture of creating and sharing ideas will emerge – after a while this way of working will just become something people do.

At the same time we could ask the senior engineers in the organisation to  make a point of regularly sharing their creative thinking on projects and asking other people about their creative work.

Finally we can run focus groups with groups of staff to explore how they relate to sharing creative thinking with others. There could be all sorts of reasons why people are nervous or uncomfortable about sharing their ideas (this factor also emerges as part of Csikzentmihalyi’s creative systems model). As Laloux suggests, ‘coaching could help uncover limiting beliefs’.

Creative culture is not something that can be manipulated directly, but we can reach it through the prosthetics of personal beliefs, group behaviours and organisational systems and processes.

Defining that culture is something we can do using a tool like the Culture Web (see my next post). How easy it is to change is likely to depend on the type or organisation we are dealing with – but that’s a conversation for  another day.

One Reply to “Building creative culture in engineering companies”